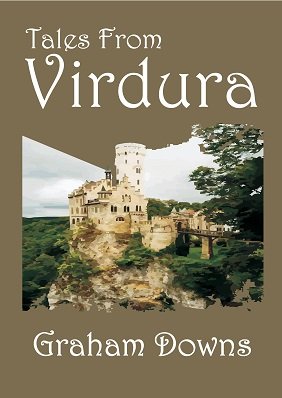 The short, skinny, balding man smiled, showing many gaps in his yellowed teeth. He chuckled as he held up the bright blue jewel; the sound was something between a horse's whinny and a hippopotamus' grunt.

"See here?" he said to his friends. "I told you so – the treasure of Artheros is ours! And nobody will ever be any the wiser. Now, wasn't it worth all the spelunking, Sam?"

A man to his left clapped him on the back, then reached into the bag on the ground and pulled out his own stone, a translucent yellow one. "That's for sure, Jack. Our only problem now is how to spend it."

Agreeable noises erupted from the seven other people sitting around in the circle, as they all nodded enthusiastically. A silence fell upon with group, punctuated by satisfied sighs as people took various jewels and gemstones in their hands and admired them.

After a while, another man spoke. "Tell you what, though: there is one among us who doesn't deserve but a single stone." He turned to face one of his peers, a small man sitting silently in the corner. Pointing at the man, he said "Martin. What did you do to help us win this treasure? Why, when that giant spider attacked, you cowered behind me, that's all you did!"

At that, Martin leapt to his feet and exclaimed in a voice far louder than his stature would suggest, "I did not cower, Devon! I was using my superior intellect, and waiting for a chance to sneak around the spider and claim the treasure. And I did, didn't I? I could've carried it out again too, and you'd have been none the wiser, you were too busy wasting your time with the spider."

Devon, the man who had accused Martin, drew his sword and pointed it at Martin's throat. "You take that back!" he said.

All at once, the entire company was on their feet, standing in a circle around Martin and Devon. "Fight! Fight! Fight!" they chanted.

But before the fighting could commence, a loud voice was heard from outside their cave. "Jack the Pilferer! You are under arrest, by order of the Queen of Virdura. We suggest you come quietly, or we will come in and get you. And in case you haven't noticed, that bag you claimed from Antheros is full of nothing but worthless glass baubles."

The boy's father looked down at his son and smiled lovingly. "Yes, it was. But it's also quite serious. You see, Solon, one day, you will perform these divinations as well. You will serve the next queen of this fine kingdom, as I do today, and as your grandfather did before me. It's a big responsibility, not to be taken lightly."

Solon looked up at his father in awe. "Really, Father? I get to help catch rotten crooks like Jack the Pilferer?"

His father laughed a hearty laugh. "Yes, indeed, my son. That, and a great deal more."

Buy the E-Book Read the Next Story
Not on Scribd yet? Click here to get two free months, to read this and loads of other books!