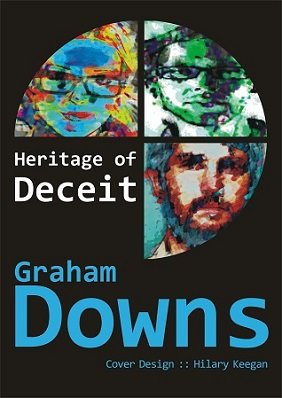 Lloyd yawned as he clicked Random Article. It was lunchtime on a Monday afternoon. He knew he had plenty of work to do, but was not in the mood. He was passing the time on the Internet. He let out a deep sigh as the page loaded: Sarie's Ring. He shot up in his chair and moved closer to the screen. He knew that ring! He read intently:

Sarie's Ring is a small metal ring, consisting of a large, central cubic zirconium flanked by two smaller ones. Legend has it that Sarie de Jager, the alleged killer of thousands during the great genocide of 1992, possessed a ring. The central stone supposedly contained, in miniature text, a record of all the atrocities committed by de Jager.

Lloyd continued reading, but the words did not register. His mind was racing. Sarie de Jager? Everybody knew that name–the evils that woman stood accused of were legendary! She had killed herself before she could stand trial, so many families desperately longed for closure.

The article explained that, after her death, her father had supposedly hidden the ring. He had denied its very existence until his own death years later, after which the ring had been lost.

Now, where had he seen that ring before?

Carla–of course! Carla was the shy woman in accounts. He had seen that ring on her finger many times before. What were the chances of it being the same ring? It could not be... could it?

He trembled with excitement. It was the same ring; he was sure of it!/p>

Lloyd had been growing restless over the past few weeks. His position in the operations department at CGT Steel had been his first, given to him because he had exhibited such young, unbridled passion during his interview. That was four years ago, though, and he was getting bored. It was becoming apparent to Lloyd that he was not the kind of man who worked the same job for fifty years. His passion was still there, but it was no longer concerned with the company. It wandered to new things, different things, ways he could make a difference and perhaps a little money on the side. Sarie's Ring offered such an opportunity. He salivated over what it could be worth. Of course, helping the thousands of families of that evil woman's victims would be a nice bonus too, he convinced himself.

Just then, Robert walked past him, flashing a cigarette lighter as he passed. Perfect timing! Lloyd was burning to tell someone, and he could do with a smoke after the excitement of his find on the Internet. He nodded, stood up, and followed his friend.

"Dude, you'll never guess what I've just found!" Lloyd exhaled a stream of cigarette smoke as he spoke, "You know Carla? The one in accounts?"

"Who? The geeky one with the crush on me?"

"That's the one," answered Lloyd, taking another puff. "Do you remember that ring of hers?"

Robert nodded, "Yes, she's always wearing it. Only takes it off when she is typing. What about it?"

"Okay now, bear with me," began Lloyd, "You know who Sarie de Jager was, right?"

"Sure," said Robert, "History's not my strong suit, but everyone knows who she was. Don't they?"

"Yes, but did you know she supposedly had a ring?"

Lloyd explained what he had read about Sarie's Ring, and his theory that it could be the same ring that Carla always wore.

"You're crazy," laughed Robert when he had finished. "Crazy, bored, and tired. Are you feeling okay?" He put his hand to Lloyd's head, taking his temperature mockingly. "I mean, `The One Ring, to Rule Them All'? Sounds very far-fetched to me!"

"Not that ring, you idiot," exclaimed Lloyd as he slapped Robert's hand away and punched him playfully on the arm. "Fine! Don't take me seriously! But I'm going to find out."

"Oh yes," laughed Robert, "and just how do you plan to do that?"

"I don't know yet; I'll think of something. Hey, we'd better get back," answered Lloyd, glancing at his watch.

Robert returned to his desk, sat down, and stroked his beard. He was a careful, thoughtful man, who liked to consider things from every angle before making his decisions. He was also a little older than Lloyd, and a little wiser and less rash, too.

He opened his web browser and punched in the address Lloyd had told him about. Leaning back, he began to read, and as he read, he began to wonder. Lloyd would have him believe that Sarie's Ring was the same ring that Carla wore. That was unlikely, but not impossible. Robert closed his eyes and tried to imagine the ring he had seen lying on Carla's desk that morning, when he had gone to ask her about a payroll matter. That ring was very precious to her, obviously. It never left her sight, and she took it off when she was working on her computer so that it wouldn't get tarnished. Although he decided that Lloyd could not possibly have been right, he resolved to try and get a closer look at it to see for himself. Carla was always acting shy and coy when he was around. It was obvious that she had a crush on him; he didn't think it would be too difficult.

"Carla!" Mr Jones stuck his head out of his office door, "Would you come here, please?"

Carla rolled her eyes. Here we go again, she thought. The man had probably tried to order steel from Arkwright again. She had told him last week that CGT's account was in arrears and there was no money to pay them. She got up from her desk and instinctively picked up her ring, slipping it on her right ring-finger. "Coming, Mr Jones!"

Carla was a short woman, and a little on the podgy side. She wore her long dark hair in a neat pony-tail and her large round black-rimmed glasses pressed snugly up her nose. With her white blouse buttoned almost all the way to the top, her mid-length black skirt hanging a respectable length below her knees, and her black court shoes, she was the epitome of professionalism. She dressed that way because she believed Robert liked it. Oh, dear Robert; tall, dark and handsome Robert, with his short, sexy, neatly trimmed beard. Many nights she had lain awake, trying to build up the courage to tell him how she felt. Of course he spoke to her from time to time, to ask her about ordering supplies, and occasionally to deal with salary queries, but she wondered if he even knew who she was, who she really was.

"Carla! Have you been listening to a word I've said?" Mr Jones snapped her out of her day-dream. "This is important! I want to give bonuses to the staff in operations. Please pay attention and take notes."

"Yes, Mr Jones," muttered Carla as she inwardly rolled her eyes again. She wondered what the operations staff had done to deserve bonuses, at a time when the company owed so much money. She started scribbling down notes. She wondered how much money Robert would get, and what he would spend it on.

Robert sighed as he approached Carla's desk. He had come up with an excuse to speak to her about Arkwright's account. He would say that he needed to order some supplies. But she wasn't there. Trying to be inconspicuous, he glanced around her desk looking for her ring, knowing full well that it would not be there. She was always wearing it when she wasn't typing on her computer. She even slipped it on to answer the phone!

"If you're looking for Carla, she's not here." Startled, he turned around quickly, to see Mary, the debtors' clerk. "She's in with Mr Jones. I think they're going to be in there for the rest of the day."

"Thanks, Mary," said Robert with a smile, "It's not important. I'll see her tomorrow."

Buy the E-Book Read Chapter 2
Not on Scribd yet? Click here to get two free months, to read this and loads of other books!