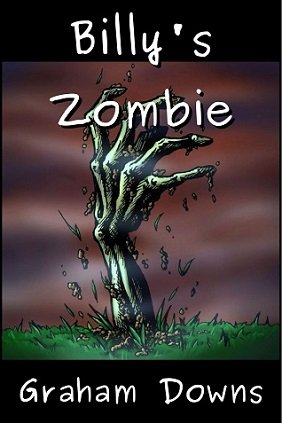 That's my creation down there. Do you see?

Shambling along the empty suburban street, in the middle of the night. Past the parked car to its left. To its right, a dog lies on his back. He rolls over onto his feet, hackles raised, and barks as he sees the creature. The creature turns its grotesque countenance towards the animal and glares at him. The poor thing cowers as his brave bark becomes a pathetic whimper.

Look, now it's standing under a lonely street light. Through this crystal ball, you can truly appreciate its beauty, with its clothes tattered and muddy, and the grave worms still crawling in and out of its empty eye sockets. My creation.

When I went to the cemetery last night, with an old copy of Contemporary Necromancy under my arm, I could never have imagined that the ritual would be such a success. I stood at the grave of old Jacob Mallardy (1955 – 2012), thumbed open the book, and eagerly paged to the spell on Raising Zombies. I'm not sure how well I expected the spell to work (if at all), but as I read the incantation out loud, the hairs on my arms and the nape of my neck stood on end, and I felt power. As the power rose in me, the dirt covering the corpse's grave began to shift. Slowly it shifted, so slowly I thought it might just be the wind, or my imagination. Then the turf broke, and a hand slipped through. A glorious, wonderful hand, the skin on the long, slender fingers all wrinkled, ripped in places so that the bones shone through, almost glinting in the moonlight.

My name is Billy MacIntyre, and that is no longer Jacob Mallardy down there. I am a Necromancer, and they will all pay for calling me a freak.

At the cul-de-sac in the distance, the zombie spies a house with some activity inside. The lights are on, the only house in the street with lights on at this hour. An old couple lives there, Mr and Mrs Kretcher. I think they must be watching television.

I've seen the way they look at me sometimes. I've heard the mutterings about me under their breaths. The spell book said that the creature needed to eat human flesh to survive. The Kretchers shall be its first meal.

As the creature lumbers towards the light, I make out the sounds of a television in the distance; I was right. But there's something more. I hear shouting, and it's not coming from the television. The couple are having an argument. I urge the creature closer, so I can hear more. Something about an old girlfriend. Her name is Melony, I think. Yes, Mrs Kretcher is berating her husband because he spoke to her on the phone earlier today. Mr Kretcher can't understand why the two of them shouldn't be friends. He makes for the door and slams it open, storming out.

The zombie is close now, and the door opens just as the creature is making ready to smash it down with its superhuman strength.

I spur the shell of the late Mr Mallardy on. It smashes into Mr Kretcher, its arms, hands, and fingers outstretched. The creature's thumbs press simultaneously into Mr Kretcher's eyeballs. I hear them pop, and I can almost feel the jelly, as it oozes out onto the zombie's hands. Mr Kretcher screams, but his scream is cut short as the zombie's thumbs press deeper into his ocular cavities, through his skull, and into his brain. What strength my creation has!

Mrs Kretcher shrieks as she enters the passageway between the open front door and the lounge. The zombie tosses Mr Kretcher's body aside and lunges for her. With one fell swoop, it smashes its hand into the side of Mrs Kretcher's head and crushes it against the wall.

The house is silent now, except for the low drone of the television. Go on, my creation; bring the man's body inside. That's it, shut the door now. We don't want any interruptions, do we? And now, my glorious monster, you may feast!

Get the E-Book Read Chapter 2
Not on Scribd yet? Click here to get two free months, to read this and loads of other books!